I had a lengthy discussion the other day with a friend of mine with whom I share a common interest in game genres. We are also both fans of watching, but not playing, Starcraft 2. Currently, the biggest games being played as E-Sports are League of Legends, Halo: Reach, Call of Duty, and Starcraft 2. The genres are rather limited. There is one RTS, one MOBA game, and two FPS games. Why aren’t other genres represented?

Well, how about MMORPGs? Well wait a moment, how is THAT a competitive game? How is it an e-sport? To answer that question, we should consider the last time an MMO was in consideration as an e-sport: World of Warcraft Arena. 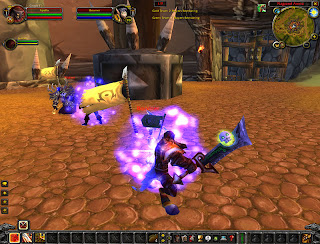 WoW Arena used to be featured at MLG (Major League Gaming) but after a few tournaments, was removed. Why? WoW is one of the most popular MMOs in the world, so why didn’t it work? Arena suffered from three glaring issues:

There were other issues but by far, these three were the worst in terms of getting widespread adoption by laypersons that have no prior knowledge of World of Warcraft. By the time a lot of these issues were addressed, Arena fell out of favor of viewers and it was dropped by MLG. It is still played at Blizzard annual tournaments but doesn’t draw as many viewers as Starcraft 2 does.
Starcraft (both the first and second game) have proven popular with gamers and e-sport fans due to the ability for anyone to follow the action. The games are fast paced and the meta-game does not shift incredibly in a single tournament season.

In another post, I will address the newest contender as an E-Sport MMO: Guild Wars 2