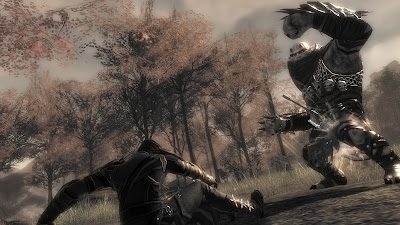 I wanted to take the time to do a write-up about some of the unique mechanics in Guild Wars 2. I think it’ll be useful to those who are new to the game and want to know what differentiates it from other MMOs on the market like World of Warcraft. This will be a multi-part series, with additional posts grouped into different categories.

This article will go over a few general gameplay mechanics.

1. Downed State: When your health reaches zero in combat, you go into a “downed” state. Your character falls to the ground, and all your abilities are replaced by four skills. The first three skills are a mix of damage, CC, or defensive skills, and the fourth skill is a call for help / heal ability. You have a limited amount of time to heal up enough to “rally” where you return to a regular state with low health, or you die. Enemies can perform a finishing move that kills you in your downed state, so you must work fast.

To be honest, I dislike the concept of the downed state. It sort of delays the inevitable and adds a extra layer to combat that does not appear to add any value or “fun” to combat. People might like the chance to come back during a fight, but with the instant kill finishing move in place and from the many PvP combat videos I saw, it served no real purpose but to just waste everyone’s time. The only chance to rally was when your enemies were almost dead and your allies came and killed them. Ultimately, I think it was put in for PvE, but should really not be in PvP. You can read more about it here.

2. Conditions: Every class has the ability to apply multiple conditions to enemies and boons to allies. One thing to note is that Damage over time skills (DoT) come in two variations: Stacking in intensity and stacking in duration. DoTs that stack in intensity do more damage per tick with each application and DoTs that stack in duration have their duration increased with each application. The conditions are:

Bleeding – DoT. Stacks in intensity (applying , up to 25 times. Was 9 stacks max in previous builds).

Blind – Non-stacking condition. Causes the afflicted target to miss their next attack.

Chilled – Causes 66% movement speed reduction to the target, as well as increasing the target’s recharge time for abilities already on cooldown by 66%. Stacks in duration.

Confusion – Causes the afflicted target to take damage every time they attack. Stacks in intensity.

Crippled – Afflicted targets have their movement speed reduced by 50%.

Fear – Interrupts the afflicted target and causes them to run away from the target for a short duration.

Immobilized – Roots the afflicted target, preventing all movement and dodging for the duration.

Weakness – Afflicted target’s endurance regeneration is reduced by 50% for the duration. Also, it causes 50% of their to do only half damage.

Quick Analysis: From the look of the videos from the latest Beta Weekend, your typical battleground game and open world pvp will be won through burst damage. People have been stacking damage cooldowns, picking off a player, then running away through the cover of the chaos of battle and fellow players presence. Drawn out fights will most likely occur in  structured 5v5 PvP where you can sort of prevent allies from getting “bursted” through intervention. Thus, I believe conditions will matter more in structured PvP unless they decide to improve how conditions can help control the flow of a fight.

I will post videos and go into more detail into other aspects of the game in my subsequent posts.