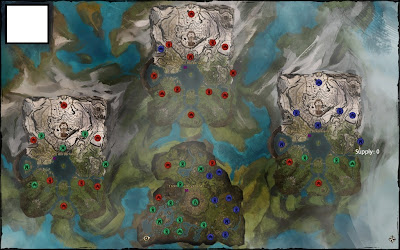 The above map is the current beta WvWvW map. The world is divided into Green, Red, and Blue servers. The bottom center area is the contested area of The Mists. The icons on the map indicate different points of interest. It appears that the color of the icon indicates which side currently holds it. The legend is:

Castle (Only 1 on the map, in the center of the contested area)

Tower
Each home area has:
6 Supply Camps
4 Towers
3 Keeps
The contested center area has:
6 Supply Camps
12 Towers
3 Keeps
1 Castle (Stonemist Castle)
ArenaNet has stated this is their working beta version and subject to change. A few thoughts on the map:
1. It appears to be largely equal. While the battlefield as a whole won’t be different, there is a positive in homogeneous maps. The complaint in other MMO PvP maps in the past were that the maps were “unequal”. Those who have played World of Warcraft early on can probably recall the uproar over Alterac Valley and the supposed biases and design flaws built on purpose into the map to benefit one side or the other. While the MMO community as a whole enjoy beautiful battlefields of varying terrain, they care even more that its absolutely equal. This design theme will head-off any complaints ahead of time.
2. There are plenty of objectives to capture, especially in the middle area. It also appears that there is no progression or order to captures; You do not need to capture the closest point first in order to capture the next. Besides raiding supply caravans, a group of people can get behind enemy lines and capture supply camps to hinder siege weapon creation or a tower to provide a staging point to go further into enemy territory.
What is up in the air is whether there will be requirements to capture the center Castle or other important points on the map. Could potentially a group go deep into enemy territory and capture the center castle from under the noses of the other two sides? I am curious as to how they will handle if one team absolutely dominates another, and not only pushes them back to their home zone, but also takes all their towers and keeps in their territory? Will there be a mechanic to allow those who have been pushed back so far a chance to retake at the least their own territory, or will they be stuck in their home base for the rest of the two weeks?
3. It appears that access from one home territory to another is limited to just the adjacent territories. This leaves the top middle home zone vulnerable to three fronts, unless there is a way for the left and right home zones to access one another through a portal of some kind, as currently on the map they’re only accessible by the top middle and bottom middle zones.
I’ll leave you with a 45 minute video of WvWvW beta gameplay.