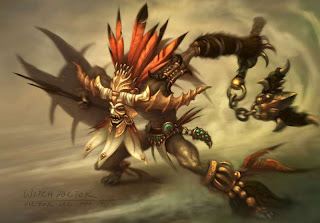 Pets: The Witch Doctor has access to 2 types of permanent pets – Zombie Dogs and Gargantuan, a large zombie. They’ll be in a role similar to the D2 Necromancer’s Skeletons and Golem, providing a degree of dps and general crowd control / interference.
Damaging Spells: Most of the spells do Poison, Fire, or Arcane. The damage spells take on the form of a creatures, for example a frog that does poison damage. The spells are well diversified between single target, multi-target, and AOE damage.
Crowd Control: While a number of spells can be runed to snare or root, the three primary crowd control spells are:
Blizzard’s decision to perhaps limit the number of permanent summons is a step away from the “Zoo Herder” play-style of D2’s Necromancer, as those who specialized into summons had difficulty in harder difficulties unless they also invested heavily into the Poison & Bone Spell or Curses trees in order to boost direct damage spells to help out the summoned pets in combat. Specs around Revive were also viable but required shifting away from “Zoo Herding”. The Witch Doctor will still bring a degree of summoned pets, but by limiting the number of summon spells, it will force diversity in Witch Doctor builds and at the same time allow those builds with summons to also be potentially viable in harder difficulties.
There are also a couple “temporary” pet spells available, such as Fetish Army and Hex, involving the fetishes we know and love from D2’s Act 3. The Fetish Army summon can be viewed as a burst cooldown as the fetishes last 20 seconds and the cooldown is 120 seconds. Hex summons a fetish shaman that will turn enemies into chickens temporarily. There are a few more temporary summons if you choose to utilize a rune to do so, such as a giant toad, a giant spider, or a spirit.
Overall, the Witch Doctor looks like it will be a good class that can manage harder difficulty levels on its own through crowd control, a strong variety of damage and DoT spells, and pets to soak up damage and run interference. Visit our blog again in the future as we cover Witch Doctor spell & rune builds.